Situated in Leeds, Stourton Park and Ride was developed by Leeds City Council to introduce a wave of integrated renewable energy technology into the city, and became the first fully solar powered park and ride in the country.

This project is an example of how to push the boundaries on every front with solar PV, curved carport frames, behind the meter batteries and future proofed EV charging points combining to solve a problem on a 400kW grid constrained site connection. This is an exemplar project, for a client with high expectations for whom only a high specification, bespoke solution was acceptable.

The project consists of a multiple Y shaped solar carports, which are placed, in curved rows to cater for the circular design of the park and ride site. This layout means that the edge of each solar carport had to be placed extremely close together to maintain the bend around the site, which therefore, required an extra level of skill from our technical design team.

The Y shaped solar carports with trapezoid steel roofs, add strength, with an integrated gutter system to enable rooftop access for panel maintenance. The trapezoid steel roof supports any engineers maintaining the panels and gives a clean finish for users looking up from underneath.

The carport frames are installed in concentric semi circles with east-west orientation to split generation curves and maximise the opportunity for onsite consumption. 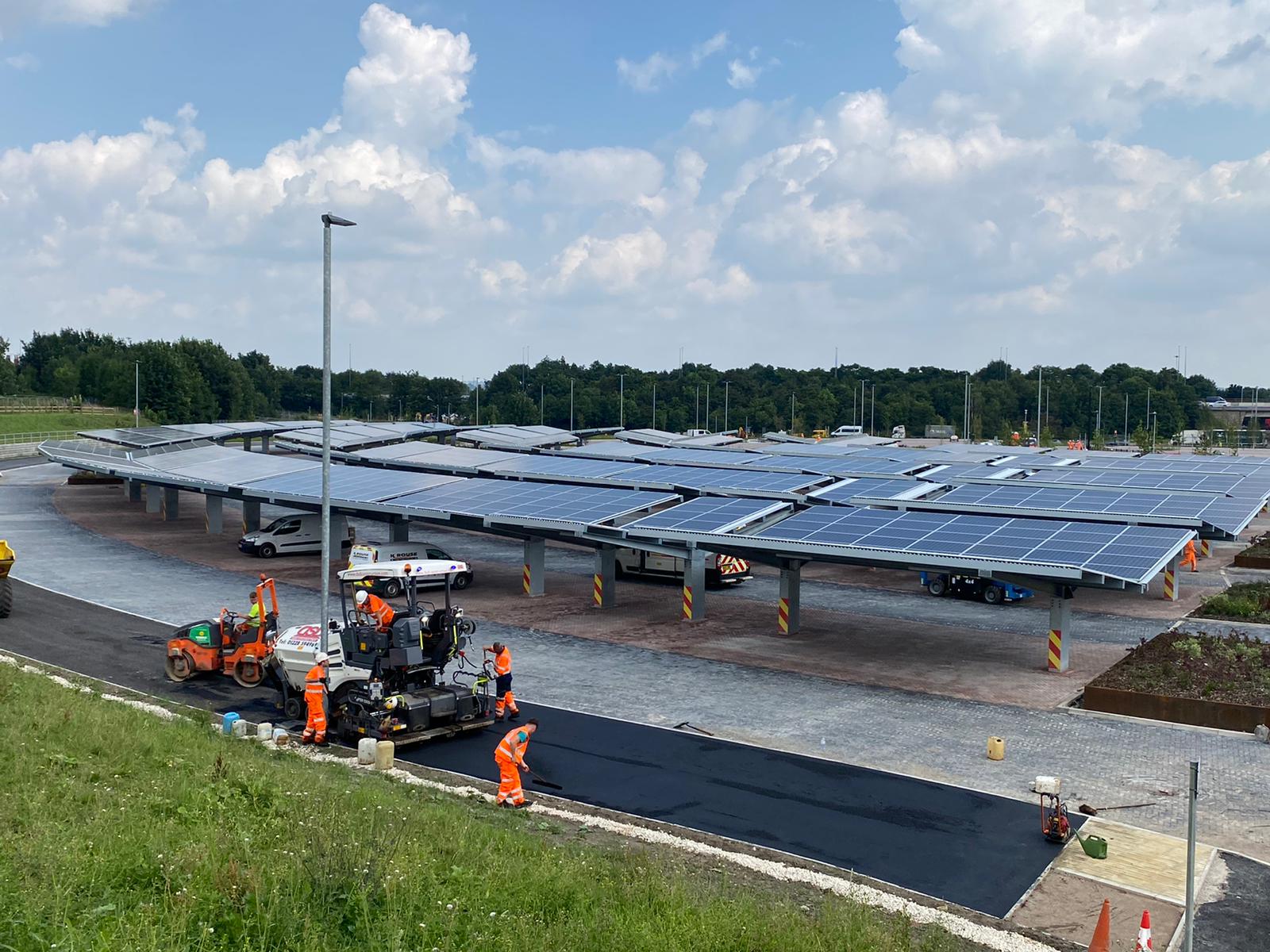 In addition to this, a 500kW/ 950kWh Tesla battery has been integrated into the main building to maximize onsite consumption of the solar PV and help alleviate some of the peaks caused by simultaneous EV charging events.

What’s more, the facility will boast a solar generational capability of 1.2MWp, along with top of the range EV chargers to support the upcoming transition to electric vehicles. There are two dedicated EV charging bays solely for users with additional needs with no kerb around the charging points, highlighting LCC’s commitment to inclusivity.

Each panel pair has a Solaredge optimiser behind, meaning that you can see the sun pass across the sky (or the earth move around the sun!) in the live Solaredge portal on the curved array. Having separate MPPts for the panels is a necessity due to the curved array layout.

Solaredge inverters are centrally located in the terminus building, utilising “safe DC” distribution at 850V, cable runs in smaller cables to minimise material wastage. This meant no inverters around the carport structures leading to a cleaner finish for drivers and more efficient electrical distribution.

To decrease the £/kWp price of the solar carports, highly efficient Sunpower Maxeon 400Wp panels were used, maximising the carport’s roof generation capacity.  Because of the Maxeon Solar module customisation, the panels will yield more kWh/ per year from the first year, and will degrade slower than other panels meaning more is generated over the system’s lifetime.

As a result of this project, Leeds City Council has a modern renewable energy system with the potential for future expansion.

The PV system is estimated to generate 852,000 kWh/ yr, only 12% of which is estimated to be exported, because of the battery and solar interaction. Overall, the Solar PV will offset 471 tonnes of carbon in year 1 which is the equivalent of removing 203 cars from the roads.

Because of the integrated solar and battery system providing low cost electricity (compared with grid price inflating energy) payback for the EV charging points is estimated to be less than 10 years, based on an average of two charges per day in year 1, inflating with 8% estimated consumption year on year (based on future energy scenarios data). What’s more, due to low battery energy throughput, battery life will be extended to 15 years and beyond.

We installed a weather station to augment the existing LCC Weather database and also to calculate Performance Ratio.

Due to import site restrictions, currently the battery load shifts the solar PV and takes grid import for the site to zero most of the time. In the future, we have modelled several battery scenarios, e.g. peak shaving, grid services, time of use energy shifting, depending on future grid conditions. Any of these are possible with the Tesla’s highly flexible Site Master Controller.

The EV feeder pillars and electrical distribution is built with 25% redundancy for the future retrofit of more EV charging points as demand allows.

The EV charging point system can be peak limited to enable more EV charging points to be connected without exceeding the limited 400kW peak site import capacity. The peak limiting affects the 7kW chargers first, then the 50kW chargers, to prevent unfairly penalising customers who have paid a premium for the increased charging rate.

Interactive monitoring of the BESS, solar PV and EV charging has been integrated into the terminus building so that members of the public can see the historic and real time impact the systems are having on the facility.

Up to 1200 cars per day will be removed from Leeds’ roads, supported by the new Park and Ride electric bus service. This is the first in a network of electric, solar enabled park and ride sites.

Ultimately, the £38.5m project provides the site with a reliable source of renewable energy and high quality EV charging facilities. The project is a key part of Leeds City Council’s strategy to hit zero carbon by 2030 and will improve Leeds air quality for residents and visitors.

The system will reduce carbon emissions for many years to come, which is critical in helping the region to achieve their carbon neutral status by 2030 and supports UK road user’s transition to clean energy.

Going forward, we will retain a full O&M contract for the next 5 years to ensure that it meets continues to perform at optimum levels.

Stourton Park and Ride is now the UK’s leading infrastructure site that demonstrates some of the grid’s limitations and the essential need for smart energy solutions, whilst also providing a snapshot of the UK’s energy future.

“The exciting development of Stourton Park and Ride builds on the obvious benefits of people switching to public transport use to reduce their impact on the environment. Solar panels and an innovative battery storage system, paid for with European Regional Development Funding, will provide energy for the whole Park & Ride site, which will be served by electric buses.” – Cllr Lisa Mulherin, Executive Board Member, Leeds City Council

The well-established housing company has invested in and now manages more than 31,000 homes across Wakefield.