Do solar panels work in winter?

It’s easy to look outside in the summer and think that solar panels are a great idea, but looking out of your office window in winter might not have quite the same effect. The three-month British winter (which may feel more like a four- or five-month season some years) doesn’t exactly inspire confidence in solar panels’ effectiveness.

But does this need to be the case? Do solar panels work as well in winter as in summer? If not, does it matter that they don’t? If you’re asking questions like those, you’re reading the right blog post.

Answer: Yes, they still work in winter but will only produce around a fifth of the energy which they produce in the summer. Read on for more information.

The basics: how do solar panels make energy?

Before going into specifics, it is important to understand how solar panels work. The core ingredients are photovoltaic cells: special units normally made out of a kind of silicon. Photovoltaic cells – sometimes called solar cells – have a property that means they produce energy when hit by photons, which is the name for light waves/particles. This energy is then turned into a usable electric current by an inverter and fed into our offices, homes or the national grid.

Importantly, it is photons on the visible spectrum (i.e. light that we can see, not infra-red or ultraviolet light) that energise photovoltaic cells, not direct sunlight specifically. There are always photons flying towards a solar panel, regardless of whether or not the sun is shining on it directly.

Direct sunlight is a better source of power because it is stronger, but solar energy production does not simply stop on an overcast day. We’ll return to this idea shortly.

How does the winter affect solar panels’ energy production?

Solar panels do not perform identically in summer and winter. We’ve broken down the three main factors below.

Contrary to popular belief, colder weather is actually better for solar panels’ efficiency than warmer weather – this is a slight benefit from the winter months. While this might seem counterintuitive, remember that only visible light matters for energy production; heat (infra-red light waves) does not interact with photovoltaic cells to make more energy.

Unfortunately, any benefit from colder temperatures is outweighed by lower light levels and so they won’t work as well on a cloudy day. Three factors contribute to less light in winter:

While solar panels can still generate energy on overcast days, they could be anywhere between 50% and 90% less efficient. In addition, the sun being lower in the sky means that less direct sunlight hits your solar panels and shorter days mean that sun simply isn’t around for as long in a 24-hour period.

Snow is the biggest issue in winter, though thankfully it is the one that you can do something about. Any cells covered by snow will not generate any energy, as sunlight cannot reach them. The simplest solution is to get up on the roof (when it is safe to do so) and clear the panels so that they are no longer obstructed. 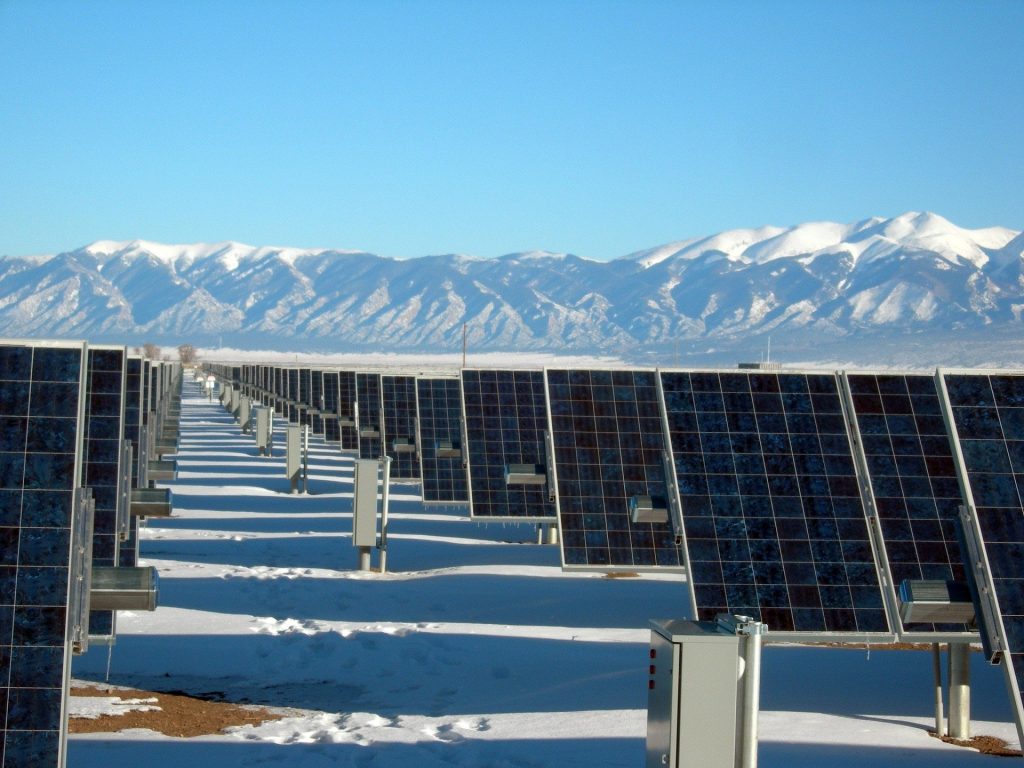 How much do solar panels generate in winter?

The factors that we have mentioned all add up to solar panels only producing around a fifth of the energy in winter that they produce in summer.

Does this mean that you’ve wasted all that money on your facility’s solar installation? Should you scrap any plans you had of installing solar panels in the future? Emphatically, no.

Companies like EvoEnergy take British seasonal factors into account when working out what kind of installation you need. If worked out correctly, an installation should continue to meet your needs all year round, especially if the solar PV is accommodated by a battery system to help store energy generated in more sunny periods during the winter.

Remember, the gloomy winter days are at one end of the spectrum and bright summer days are at the other. We take the long view with any installation and encourage you to do the same. Across the year, you can be confident that your solar panels will produce the energy that you need from them.

Winter shouldn’t give you anything to worry about.